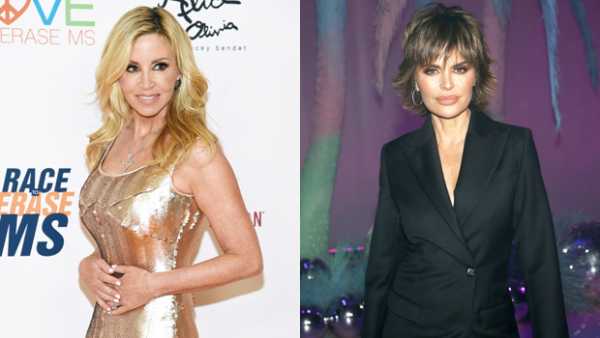 Camille Grammer thinks she’s ‘so much better than’ Lisa Rinna. So much so that she took to Instagram to try and outdo the ‘RHOBH’s star famous dance videos. Did she succeed?

We think it’s safe to say that Camille Grammer, 51, doesn’t like Lisa Rinna, 56, very much. On April 29, the OG Real Housewives of Beverly Hills star “took a break” from her beach bike ride “to do a little Lisa R ribbing”. As she stood on the sand and showed off some wild dance moves, Camille told her Instagram followers that she was “just being silly”, according to one of her many hashtags, but for anyone who follows Lisa Rinna, it looked like a deliberate attack on the former Melrose Place star.

Lisa regularly posts her own dance videos on Instagram, and after Camille made it clear that she was teasing her on-again/off-again co-star, a fan took the diss up a notch by saying, “So much better than Lisa R.” And that’s when Camille’s playful diss took a turn for the worst. “And I’m not in a nude see-thru bodysuit in my bathroom filming myself,” Camille added, which is an obvious dig at Lisa’s own Instagram videos. Lisa has yet to react, but you can see the comments below.

Over the years, Camille and Lisa have always been friendly with each other, but their friendship took a hit last year, when Lisa Rinna told Camille that she let Lisa Vanderpump off the hook when it came to “puppygate”. Camille didn’t take that criticism very well, as she sided with LVP in her fight against the cast, and they’ve been at odds with each other ever since.