Priyanka Chopra showered hubby Nick Jonas with love on his birthday with a sweet tribute that included a romantic snap of the couple smooching.

Priyanka Chopra, 39, just shared the cutest birthday tribute to her husband Nick Jonas! To mark the Jonas Brothers singer’s 29th birthday on Thursday, Sept. 16, his 39-year-old actress wife posted a PDA-filled snapshot of the couple kissing at what looked to be Nick’s birthday party. “Love of my life. Here’s wishing the kindest most compassionate loving person I know a very happy birthday,” Priyanka captioned her photo. “I love you baby..Thank you for being you. 😍🙏🏽❤️,” she added.

In the celebratory photo, Priyanka wrapped her arms around Nick from behind, as the birthday boy planted a romantic smooch on his wife’s cheek. Behind the couple was a large banner that said “Happy Birthday Nick,” as well as a few fancy cars, gold and white balloons, and a table set for dinner. Priyanka was dressed for her handsome husband’s celebration in a stylish, all-yellow ensemble, while Nick opted to wear a more casual black T-shirt, black jeans and white sneakers. 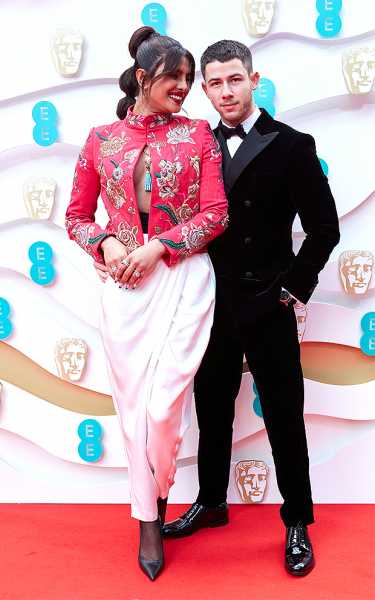 Priyanka and Nick have been happily married since December 2018, and this past summer, they celebrated the third anniversary of Nick’s proposal. In 2018, Nick told Vogue that he purposely waited until after midnight to propose to Priyanka so they wouldn’t face any potential conflicts in the future. “I got down on one knee, again, and I said: Will you make me the happiest man in the world and marry me?” he said at the time. “No joke—she took about 45 seconds. Forty-five seconds of silence.”

Now that the couple is heading onto three years of marriage, children could very well be in their future. “That is certainly something we’re both looking forward to,” Nick told Apple Music’s Zane Lowe in July 2020. “And know that it’ll happen when it’s supposed to, and we’re ready for that.”