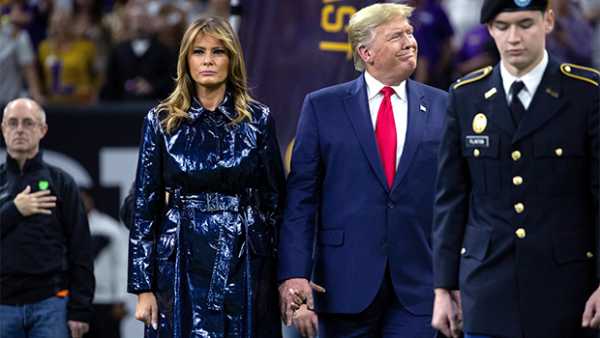 Donald Trump will never learn to keep his hands to himself, especially when it comes to his wife, Melania Trump. The moment he tried to hold her hand at the college football championship game, she yanked it away!

While under growing pressure from the crisis in Iran and his numerous scandals at home, the impeached President Donald Trump, 73, decided to take in a little football on Monday, Jan. 13. He and First Lady Melania Trump, 49, attended the College Football Championship game between Louisiana and Clemson in New Orleans. Before the playing of the National Anthem, the Trumps walked out onto the field to stand at attention. As they got into position, Donald laced his hand around Melania’s, only to have her pull it away from her husband. The moment didn’t go unnoticed by fans, who skewered Donald online after this latest case of “Hand-Gate.”

“Melania hand snatch game is strong,” one viewer tweeted. “Not that I have any sympathy for her, but same, Melania. Same.” “Once again, Melania jerks her hand away from [Donald].” “Always love when Morpheus Melania Trump does the Matrix holding hand pull away with Donald.” “Wow. The withdrawing of her hand from his is in itself noticeable, but the look on her face and the deep breath – double wow. Melania is not happy with the dotard.”

While many thought that Melania swatted away Donald’s hand, some thought that Donald was the one pulling away. “Yo trump threw Melania’s hand so hard. wth is wrong with him?” “Looks like someone is a little stressed out about IMPEACHMENT this evening.  Here’s Trump flicking away the hand of Melania.  What a cute couple… If you think ‘angry dictator’ is cute.” “He abruptly let’s go of her hand. She visibly catches her breath to compose herself as it happens. They don’t even bother looking at each other. Usually, she’s angry with him. In this clip, Trump seems clearly angry with Melania. No love lost here.”

Not that I have any sympathy for her, but same, Melania. Same.pic.twitter.com/7cUvrUU1nL

No matter who pulled their hand away, it’s undeniable that Melania’s smile dropped faster than Clemson’s championship hopes the moment Donald grabbed her hand. (In case you missed it, LSU defeated Clemson 42-25.) This is just the latest case of Melania and Donald being incredibly awkward with it comes to their hands.

Overall, the night was a bad one for the Trumps and those Trump-adjacent. While leaving the White House for the game, Melania’s high heels sunk into the lawn. At the game, in a different sort of “HandGate,” Vince Vaughn got dragged online by fans after shaking hands and having a friendly conversation with the unpopular president. 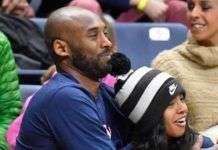 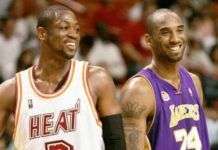 Dwyane Wade Cries Over ‘Friend’ Kobe Bryant: ‘I Will Miss You Forever’ — Watch 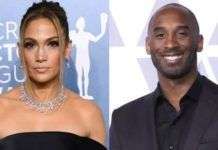