As Spider-Man: No Way Home promotion begins for Tom Holland and Zendaya, the co-stars did their first red carpet event together as a public couple while attending Paris’ Ballon D’Or event. And they did pose together—albeit in a more sneaky way.

Agency photos from the event have them posing separately, but soccer player Robert Lewandowski’s wife, Anna, posted an Instagram of Zendaya and Holland posing alongside her and her husband on the red carpet. Holland had his arm wrapped around Zendaya: 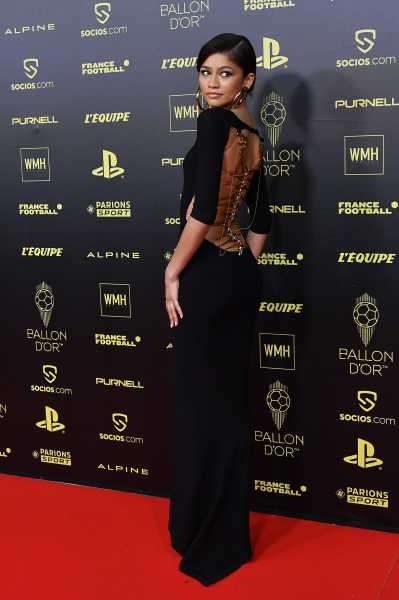 British Vogue also shared a photo of just Holland and Zendaya posing together inside the event, looking very coupley.

Holland shared a video on his Instagram today of his and Zendaya’s time in Paris, where they appear doing press junkets. He captioned it, “Ain’t nothing like a weekend in Paris. @sonypictures @marvelstudios.”

In a GQ interview released in mid-November, Zendaya and Holland both spoke about how they hadn’t really wanted their relationship to become public.

Zendaya said by phone that the interest in their romance “was quite strange and weird and confusing and invasive. The equal sentiment [we both share] is just that when you really love and care about somebody, some moments or things, you wish were your own… I think loving someone is a sacred thing and a special thing and something that you want to deal with and go through and experience and enjoy amongst the two people that love each other.”

Holland told the magazine about a video of them kissing this summer coming out and outing their romance, “One of the downsides of our fame is that privacy isn’t really in our control anymore, and a moment that you think is between two people that love each other very much is now a moment that is shared with the entire world. I’ve always been really adamant to keep my private life private, because I share so much of my life with the world anyway. We sort of felt robbed of our privacy.”

Kanye West Claims That Security Would Not Let Him Into Ex...