On Thursday, Kim Kardashian and Pete Davidson were spotted holding hands in Los Angeles. Things seem to be heating up quickly and a source told Page Six that Kardashian is “constantly giggling” while in Davidson’s company.

“She’s acting like a teenager,” they said. “She’s constantly giggling. Pete has made her feel like the clock has moved 20 years back. She seems happy.”

But on Tuesday, Kardashian threw Davidson a fun party at her mom’s home in Palm Springs. While in L.A., the two posed in matching pajama sets from Kardashian’s Skims line, the Fleece Sienna Plaid Sleep Set, and were joined by Kris Jenner and Flavor Flav.

“Even when they are on different coasts, Kim and Pete stay in touch,” and insider told People. “They are getting to know each other better and getting along great…Kim loves his spark. He is very funny, entertaining and makes Kim happy. They are still dating and enjoying it. He showers Kim with compliments and she loves it.”

Kardashian and Davidson were first spotted holding hands close to Halloween while riding the rollercoaster at Knott’s Scary Farm. At first, they denied rumors that they were more than friends, but since then have been spotted out on romantic dates around NYC and Davidson’s home ground of Staten Island. Sources have said they’re really hitting it off and it’s been confirmed they’re definitely dating. 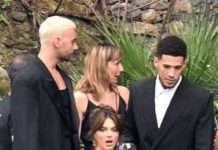 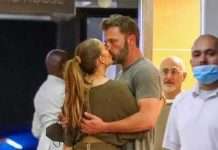 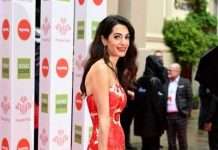