The mystery co-writer on Taylor Swift’s songs “Betty” and “Exile” has been unmasked. In her new Disney+ film, folklore: the long pond studio sessions, Swift finally reveals the identity of William Bowery, her mystery collaborator on two tracks. “So, William Bowery is Joe…as we know,” she says to folklore producers Jack Antonoff and The National’s Aaron Dessner, referencing her boyfriend of four years, Joe Alwyn.

But most people outside of that trio didn’t know Bowery and Alwyn were the same person. But Swifties, of course, had their suspicions. Back in July when folklore was released, “Betty” and “Exile” were credited to both Swift and William Bowery as songwriters. However, most suspected that to be a pseudonym, as Google searches yielded no results for that musician. Fans thought it was Alwyn because he has a composer great-grandfather named William and New York City’s Bowery Hotel was the spot for one of his and Swift’s first public date nights in 2016. Voilà, William Bowery is born.

🔎 | Fans online believe that “William Bowery” who Taylor credited as a songwriter on folklore could actually be a pseudonym for her bf Joe Alwyn.There is little to no info on a songwriter with that name, and one of the couple’s first meetings was at the Bowery Hotel in NYC. pic.twitter.com/k4ZEviVtmK

🔍 | Fans are speculating who “William Bowery” (co-wrote two songs on “folklore”) is, as there are no registered or previously credited songwriters/producers under that name. “William Bowery” is also the only untagged co-write in Taylor’s post. pic.twitter.com/CvClhjf3ZL

Swift confirmed his identity during her Disney+ film, explaining, “Joe plays piano beautifully and he’s always just playing and making things up and kind of creating things. And ‘exile’ was crazy because Joe had written that entire piano part.” She went on to add, “He was singing the Bon Iver part, the ‘I can see you standing honey, with his arms around your body, laughing but the joke’s not funny at all.’ He was just singing it. And I was entranced and asked if we could keep writing that one.”

The Grammy winner even revealed that Alwyn’s low singing voice played a role in reaching out to Bon Iver. “It was pretty obvious that it should be a duet because he’s got such a low voice and it sounded really good sung down there in that register,” she said, adding, “And then, we’re really, really, really big Bon Iver fans.”

As for “betty,” Swift’s first song written from a male perspective, she said it began with hearing Alwyn singing “the entire fully formed chorus from another room.” She added, “And I was just like ‘Hello.’ It was a step that we would never have taken because why would we have ever written a song together?”

However, Swift did admit that she and Alwyn were cautious about penning their first track together as a couple. “So this was the first time we had a conversation where I came in and I was like, ‘Hey, this could be really weird, and we could hate this, so because we’re in quarantine and there’s nothing else going on, could we just try to see what it’s like if we write this song together?'” she recalled.

Apparently, writing a breakup ballad did nothing to hinder their relationship, with Swift adding, “I thought it sounded really good from a masculine perspective. And I really liked that it seemed to be an apology. I’ve written so many songs from a female’s perspective of wanting a male apology, that we decided to make it from a teenage boy’s perspective apologizing after he loses the love of his life because he’s been foolish.” 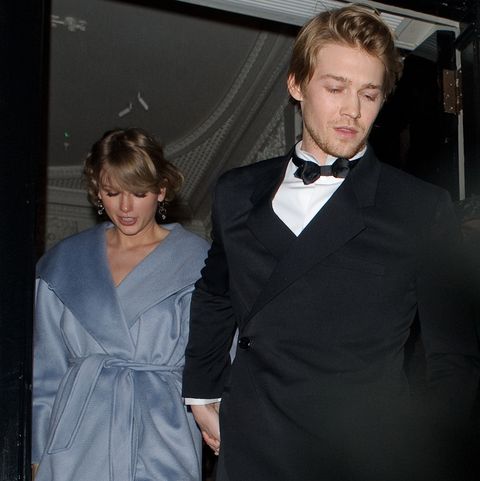 While it may have been Swift and Alwyn’s first time collaborating in their four-year relationship, she’s used a fake songwriter name before. When Swift and ex-boyfriend Calvin Harris co-wrote “This Is What You Came For,” she used the pseudonym Nils Sjöberg to credit herself. After their 2016 split, Harris confirmed that Swift was the writer after her own reps set the record straight. “Amazing lyric writer and she smashed it as usual,” Harris tweeted at the time. “Hurtful to me at this point that her and her team would go so far out of their way to try and make ME look bad at this stage though.”

Swift and Alwyn would go on to attend a Kings of Leon Concert…at the Bowery later that year.