Home Celebrity Travis Barker Hospitalized With Kourtney Kardashian at His Side: Details and Updates 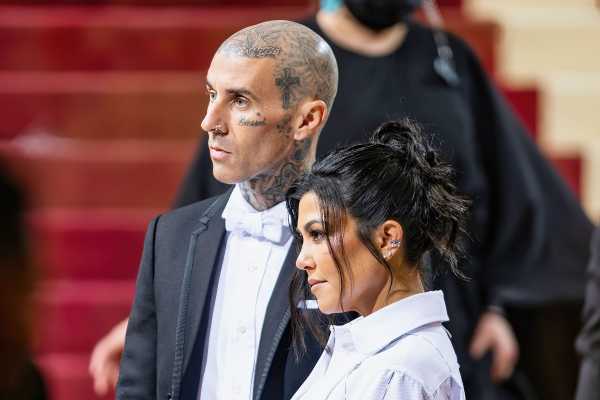 Travis Barker has been hospitalized, TMZ reported yesterday evening, and his new wife Kourtney Kardashian has been with him. On Wednesday afternoon, TMZ reported that multiple sources connected to the family informed them that Barker has pancreatitis, which doctors believe was triggered by a recent colonoscopy. Symptoms of his having an inflamed pancreas, TMZ wrote, include, “nausea, intense stomach pain and vomiting.”

When news first broke, details on Barker’s exact condition had not been reported. But TMZ learned that Barker’s condition was serious enough that he was moved from Los Angeles’ West Hills hospital to Cedars-Sinai Medical Center by ambulance because the West Hills medical team felt he needed additional care. Barker initially checked into West Hills hospital on Tuesday morning.

Barker’s 16-year-old daughter Alabama asked fans for prayers on her Instagram Story last night, suggesting Barker’s condition may be life-threatening. She is the only member to speak out about the reports so far. “Please send your prayers 🥺,” she wrote.

Barker himself tweeted yesterday morning, “God save me.” It’s worth noting that’s the name of his and Machine Gun Kelly’s song, but the timing lines up with his hospitalization.

Cosmopolitan pointed out that Barker’s 18-year-old son Landon Barker performed with Barker’s friend Machine Gun Kelly last night at Madison Square Garden. According to Billboard, neither commented on Barker’s hospitalization while on stage. They performed their collaboration “Die in California” together.

Kardashian was silent on her social media account yesterday. No other member of the Kardashian-Jenner family has addressed Barker’s hospitalization yet either.

This is a developing story. This post will be updated as more information comes out, along with any statements from the family or Barker’s friends as and if they’re released.